Religion has always painted God as angry, disappointed and a disciplinarian but Christianity acknowledges Him to be personable and loving in His ways and decrees. Yet, even for Christians to conceive that God has a sense of humor can sometimes be a stretch of their knowledge and Faith in accepting this character of God. God not only has a sense of humor, He laughs at man’s vain attempts of trying to circumvent His sovereignty. 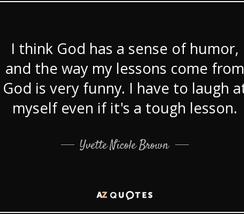 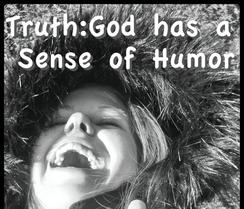 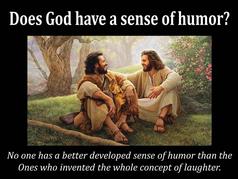 Now, to be clear; God is not laughing with a maniacal superior pride but He is rather laughing in humor like a father expressing joy with His child’s frail attempts to win over and retaliates against his control of things. In many ways, He revels in our desires for dominion over Him but with His omnipotence redirects and channels these wrongful tantrums into His will for both our good and His Righteousness.  To appreciate God’s sense of humor we must think for a moment like a ‘god’. For God knows our frame having made us with all His image possibilities with one exception of having the ability to subjugate God to our flesh. We are partakers, where must exist mutual and equitable respect for each other. As God, He can subjugate us but as our Father, He entertains our growth which includes the full acceptance of who He is. Humor is defined as an amused state of mind and is expressed with laughter, irony and good ole poking of fun. Humor is not sarcasm and the use of this is a very thin line between Godly and world-minded. Humor is used to engage with the intent of breaking down barriers and building strong and personal relationships and is mainly used with those we love, because of our intimate knowledge of their flaws and strengths. God is no different when it comes to His ultimate creation of Himself.

As an adult whether in the role of a parent, teacher or leader, it is normal because of experience and vision to be more superior, controlling and supportive of anyone who is under our tutelage. These higher roles at times act with ‘god-like’ decrees and because they have traveled similar roads, have a humorous deposition of those attempting to do something that has already been proved to be a vain attempt. Now, this is not to say, God has made mistakes and not everything is possible with Him. But being the great I Am; all known and unknown experience resides within Him.

This eventually manifest and multiply into the reality of a real set of livestock that amaze those watching and ultimately surpasses Laban’s dwlinging livestock, making Jacob wealthier and the dominant herder among the surrounding people. How God gives Jacob a majority in the animal husbandry business is very laughable and speaks to the deep mind of God’s humor. For it was not necessary or required for this technique to produce the desired results; for Faith is the assurance of things not seen. God uses an impossible set of rules to produce this miracle.

God’s humor is serious business and may seem to the world as an oxymoron or a cruel disposition by a superior deity. But God’s character is one with His will and when taken holistically there is no discrepancy to how His Kingdom on Earth is meant to operate. This side of God is what distinguishes the Truth and Righteousness of God and His Kingdom and is the linchpin that secures all His promises. For we have been encouraged and even commanded to have joy, laughter and a light-hearted nature which not only benefits us physically, mentally but especially our spirit. For humor reveals God’s long-suffering Faith in us as well as show our trust in Him.

About
JESUS
The God Series - Compassion.
Previous
IS

When Abraham became concern over God’s declaration to destroy Sodom and Gomorrah; God humored him with His willingness to stay His judgement based on Abraham's hope of finding a number of good people. God humored this request several times. To put this in perspective; these cities were not the only set of people that God deemed depraved and beyond Salvation but choose it at that particular time to demonstrate His Power for something and purpose yet to be revealed. There was no going back, regardless of Abraham’s plea or the coincidence of Lot and his family living there. God’s judgment and timing are perfect. Now, God already knew the number of good people which is why He was able to humor Abraham’s consideration knowing it would not affect His judgment. For the Angels were only sent to Lot's family. God was intrigued by Abraham’s attempt to change His mind and declaration. This act is no different when as a parent our child promises to clean their room weekly to receive a favor from us and we humor the child knowing that based on intimate knowledge this ‘deal’ as it was will never be fulfilled. At the end of it all, we all have a good laugh with jolly poking of each other.

Sometimes with godly thinking, we can see things become rather boring because nothing would surprise us. God is no different and so He revels in things that can become humorous not only to reflect His Power and Dominion but also can be very stupendous for us as well. God is love and part of that is we entertaining God as well as He entertaining us. God likes to put down the bully with His divinely superior orchestrating of natural events. It is why God often uses the least to demonstrate His Almighty hand. We see this when God uses the girl, Esther or the boy, David to save His people with the irony of the enemies laughter, plans and superiority becoming His humor as they experience the realization of their wrongfully placed pride in themselves and their hands. It’s like a baby trying to steer their parent's pinky finger. It’s so laughable that it is not hard to see the humor in it. In Queen Esther’s scenario at age fourteen; she is to face off against a shrewd and political advisor to the king who eventually is hung for his own schemes against the Jewish people. With David, who would not be amazed at the comically scenario at seeing a fifteen-year-old shepherd boy preparing to fight against a seasoned soldier, and violent giant, killing him with a single slung stone before decapitating him with his own sword. Both stories have not only irony, serendipity but also humor fit for an on-stage comedy. That stage is the world and God and His Kingdom is its audience. The world places their hearts and faith in fear; and God often uses this foolish thinking as His impetus and stage for His demonstration of His divinity, power, and miracles, often with humorous results in hind sight.

This perspective or perch is how God sees us when we try to circumvent His sovereignty across the past, present, and future. As a man, we sometimes only focus on the tree while God also focuses on the forest. Sometimes, by Revelation of rightly dividing the Word, we get a glimpse into God’s hand of dominion over the past, present, and future and without realizing it we burst out in laughter and in humor of God genius; often with jovial expressions. When this happens, we are sitting at the Master’s footstool as He humor's man’s efforts to sway His plans.

When Jacob was deceived by Laban not once but several times, God used the world’s twisted mindset of deception and physical sight to show everyone at that time His ability to use what many, even today would consider crazy and demented for a miracle. God gives Jacob weird instructions that seem to have nothing to do with establishing livestock, but in the Spirit is the basis of using Faith for the unseen.