Having Sanctification does not mean one automatic has “the anointing” but having the anointing usually requires one to be sanctified onto a work that God has specifically called you to do. Jesus was anointed to be the Messiah and had to be sanctified for the purpose. Here lies the issue of Sanctification. If one knows the purpose of their life, then it is the responsibility of the individual to prepare through Sanctification towards this work. This is the metaphor Jesus refers to regarding the branches of a tree. For by dedicated Sanctification, more and better fruit is produced by the branches that are attached to and fed by the tree of life; Jesus. We cannot escape the fact the more we spend with God and the Word, is the more He uses this connection for His Glory through us. This is Sanctification. 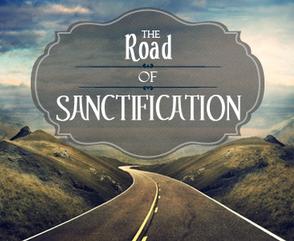 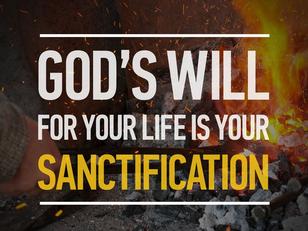 When Jesus came, He did away with the need for an appointed priest to Sanctify as required, because He filled all of the roles as the first man should have done. So in the New Covenant, anyone who is a follower of Christ is able to Sanctify with the intent to separate onto God and His work, including women; because Jesus abolished any restrictive law that retards the work of the Holy Spirit through the Body of Christ, consisting of men and women. Even a child has that ability as long as the maturity of their spirit accepts the responsibilities. The Bible speaks a lot regarding children under the guide of the Holy Spirit and even Angels, including Sanctification. The best example of a child Sanctified onto God is Jesus, who although conceived by the Spirit of God, grew just like any boy, but was set apart onto Holiness, sacredness, and purpose. We see this when Jesus at age twelve begins to reveal the Father, stating to His parents, “I must be about my Father’s business” This means other young children had or have this calling of their life, just like Moses did.

Sanctification is not a birthright or reserved for “the special people”, but under the blood, is made available to all who are part of this covenant. Since we do not require a priest or are not designated for a special purpose but rather fill a need or gap, everyone under the blood is to be Sanctified as an act of obedience to God. This comes with a person’s decision and also the leading of the Holy Spirit. It is a part of moving from milk to meat as Paul encourages us to do. For everyone is called by God, with few accepting the invitation, which includes “greater works” and not to just sit down waiting for the rapture but for training up into the Word and servanthood of the Gospel. Essentially, God will use you with whatever level of sanctification one has attained. It is not up to Him but by us, as He honors His Word and the gift of free will.

To be clear, Sanctification is not to be confused with Salvation, where the latter is a free gift, but the former is a reflection of one’s Spiritual growth. Someone with Salvation has an assurance of eternal life, but not Sanctification because this requires a continuous decision to remain separated onto God not only with the gift of Salvation, the commandments, and by obedience, but more so in their choices in everyday life. A person having Salvation may not keep a regiment of reading their Bible, but someone intent at serving and sacrificing for other men’s Salvation focuses their life towards that end, resulting in Sanctification. The main difference is usually seen in the manifestation of the Holy Spirit through works. It is also one of the indications of the level of Sanctification that a person has as “by their fruit, you shall know them”. Most people are moved by what they see as opposed by what they hear and this is why Christians are to be action demonstrators seeking to reveal God, Jesus and the Holy Spirit at whatever level of Sanctification. Paul breaks this down by referring the Holy Spirit works as the body, where each part play an important role for the body to operate efficiently, effectively and each reward is shared equally by the body. Like a coach calling the plays, the Holy Spirit orchestrates the will of God, displayed and manifested through, not only the body of Christ but people, in general, all for God’s Glory. Darius, the Persian king is a prime example of the Holy Spirit’s influence.

When one become a Christian, there is a designation for separation as in follower of Christ, but the separation of itself does not automatically place one in what is commonly called the five-fold ministry, which are prime leadership roles, not positions. In addition, being in the five-fold ministry is not an automatic Sanctification. If anything individuals who believe they are called for these roles have a greater responsibility and liability to ensure their Sanctification is pure, dedicated and Righteous. Having Sanctification has nothing to do with your role or status but more in how one conducts themselves through Holiness and Righteousness. This means someone sitting in a pew can be more Sanctified than the person preaching at the pulpit. All of this is due to a workman, “rightly dividing the Word” and receiving Wisdom, Understanding and Knowledge as well as Revelation of the Spirit, Word and God; and most importantly puts it into action. Paul is an example of someone who was “Anointed” for a work, that was to preach the Gospel specifically to the gentiles but was not part of what would have been considered a part of the five-fold ministry of that day. By his conviction, Paul proceeded to become totally Sanctified onto the Word, often referring to himself as the “slave of Christ”. Nothing in the Bible prohibits anyone with enough desire to do the same.

Can one do without Sanctification as a follower of Christ? The answer is obvious when taken from the heart but it requires the body, mind, and spirit to be convicted. To Sanctify is to separate, designate and reverence onto Sanctification. When Jesus rose from the grave, He released the curse on Sanctification as a part of anything that satan through deception placed on man as with all evil works, now having no ability to keep us from all God has made available before the foundations of the world. By this, our Sanctification is guaranteed, whereby we chose to Sanctify the body, mind, and spirit as the Temple of God, no longer requiring outward but only inward Sanctification.

Sanctification is about separating onto Holiness, sacredness, and purpose. This is seen through the Bible when individuals were called and trained up for a special work that God required to be done. It is not about being a Biblical Thumper or speaking in old English with Thee and Thou as if to elevate oneself above everyone else. You can’t have Sanctification without the act of Sanctifying, meaning it is an action that must be done but more importantly practiced and kept. In the Old Covenant, it was the responsibility of the priest to Sanctify individuals, things, and animals.