"Make it your Day"
Archives
ALIVE
"Rejoice"
"Expect the Unexpected !"
"The Trumpet has blown !"
"The battle continues"
"Just do it !"
"Overcome !"
"Fill on Words !"

No weapon conceived can never prosper over those who walk after the Victory. Again, I say, walk after the Victory! So raise, fly it high by its Glorious tempo and by confidence; the flag of the risen cross. Not that old rugged cross, but one freed of its nails, rags and the weight of darkness. For it is a new and Glorious cross, renewed with every single promise. The flag we fly is a Victory flag!

Let the flag of the risen Lord be seen, let it lead and be the rallying point for us who in Christ yearn for justice; who yearn for the brightness of God’s Glory; so that darkness runs and hides to the very crevices it tries to leave, to stay in the shadows of those deep depths. For the Glory is already given and with it, the flag of the cross is embraced. It has been decreed that darkness will fall and as in old times when it has become dim, the light will emerge and pour out like water; flooding and to shine into the dimness to make it bright for all to see. And every eye will be open at the return of Jesus Christ. For His coming will not be silent nor dull, but with blaring trumpets; with pomp, reveling and praising of the Heavenly gathering; waving His flag to declare His train for all to see and hear. No longer a humble, helpless lamb, but the Christ; the first to ascend from the grave and rightfully Victor over death himself. He will thread boldly once again over these lands, calling for all who desired goodness and righteousness to follow, leaving His mark as the sign of His everlasting promise.

Just as the palm branches were cut and waved as He entered into His fulfilled destiny to draw a sword; so will He complete His promise with full regality of His confirmed authority and stature. So raise His flag knowing He comes and be not cowered or receive rebuff for your Faith, restrain not your tongue or your members; but with every moment look up at once to His flag and the Victory He won for you, encouraging the company of the saints to do the same. Be as a child receiving a gift, with eyes blazing with light and actions unable to be contained. The words of old have a new life today and yet time pays no attention to them but races towards the inevitable fulfillment of all things, of all places and signs. Like a jigsaw, the pieces come together revealing its composition for those with the Spirit to see. The Spirit He has given us to know and prepare. And by this Spirit are we confident to hold not to this world but to the one that comes ushering the end and the beginning of another age. Raise His Flag! 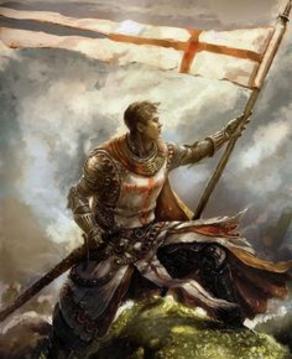 Previous
IS
Do not be afraid !
"Be Sanctified !"

Raise the flag of Jesus. My brothers and sisters of the army of Christ, our Lord Jesus Christ has won the Victory for us and has defeated our enemies. So act like it. Too many have not taken what the shed blood has done for you. Declare it not only in your hearts and minds but more so in your walk. For did not, the crucified Lord rightly so show darkness His triumph over them and in their very abode. He mocked them despite their taunts and vileness and gave them a promise that you would too. Jesus overcame death so that we who are in Christ would be a reflection of His works. The works of life and not of death. This life is for the living; so live in Him and allow Him to live through you. For we, the saved have been risen as He is, having put to death any doubt of who is master over the grave and that of the strongholds of the pit.