Arise and be counted for Christ is on the move. Whenever tyranny raises its ugly head somewhere someone will rise up and begin to move. As the old song goes, “Onward Christian Soldier” marching as to war. From the very beginning, we were preparing for this battle to end all wars. As Jesus stated that His purpose was not for peace but for war. To separate and distinguish all who would forsake traditions, cultures, history and flesh for the Word sake. Jesus brought a sword to fight the battle of words, dissension, and disobedience. He made it known that fights will break out among the family, friends and governments. That these signs will blow the horn towards war when and where all will be made accounted for. This final battle is just over the horizon.

Previous
IS
"Overcome !"
"The Trumpet has blown !" 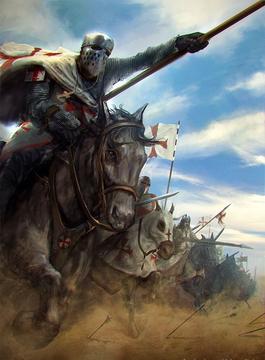 ​None will escape this last battle and for those who think they can avoid it are sadly mistaken. So, take up your arms, put on that breastplate and be constantly prepared to be challenged, taking ground that is rightfully yours, and with the shield of Faith; fear not for the Victory has already been won. Many will die for faint of what comes because they did not heed to strengthen and fortify their foundations for the day. So heed now! Prepare as any good soldier would; practice, recite and develop all the righteous skills, for that day will come and soon. Bear with one another as Paul encourages supporting growth in each other for none are truly perfect. Make unity among the brethren the number one priority so that as all joints supplied there is unison to win the battle. But be wary of he who shows unity but neither speak of or do righteousness. For without righteousness, the colors that are flown will not be the body of Christ.

Onward Christian Soldiers and be counted. And with determination, march as to war knowing that as the flag of righteousness is flown and all your muster is behind that flag, with the shouting of Praise, Worship, and Thanksgiving; God, Himself shows up for the fight. As with Elisha, so we must open our Spiritual eyes and see the armies of God joined with us to do battle. Are you ready? Ready to take the hill, the land for righteousness sake. Shout the cause and be not ashamed for by blood are we bought and it will be by blood are we welcomed into the Kingdom of God. March! March! I tell you, March! Stand tall when faced with adversity, giving no ground to the enemy even onto the pain of death holding to the one profession that saves all. Jesus Christ, my Lord, and Savior! It may seem we lose liberties but for all the human rights loss we gain more the birthright which is our reward for being Christ in the world and denying being of the world. So stand and be counted in the army of our Lord, labelled and stained with the blood of the lamb ready for the battle and being led by the Lion of Judah.

"Stand in Unity !"
View on Mobile