Do not despair at the lost of Righteous pillars for He who has His eye from the past, the present and the future keeps score of all hearts before Him. He is just in His Faithfulness. Keep hope alive for Christ is a living Savior and with keen wit does He reward those who oppose His reign as well as we who are in His Body of Righteousness.

As the Body is whole so must our voice and vision be. For Christ has no season but is in all eternity forever enthroned upon God’s Grace of unity. In this day when fear emboldens itself so in folded effort must the Body, and mind and spirit be brazed with Christ in every breath and step calling to remembrance His own work under tyranny. For we are no longer a follower of Christ; but now in His ascension; His representation to not only the Body but more so, this dying world.

Brothers and sisters! The path of Righteousness has been laid and many before us have not deviated from it. For this Glory cannot be undone! And by its light; darkness has to but recede into its shadows. So let us not be in shame of Christ’s light but in steadfastness and firm footing give His Spirit its desired due for His Revelation to be manifested. Christ died but is risen in everlasting Glory and so will we be caught into the brightness of His illumination.

Give Him His due and see how much living is done through you to the Praise and Glory of His name. Christ is the just one! And we; justified in Him! Has not the Father’s love been sincere? That one should be given up for so many yet to be born into the Blood of life. And despite this world’s disservice to His weight yet He withdraws not His life-giving Blood for all having no bias in neither flesh nor mind; keeping not a dim lit but a framing fire of Salvation for all whom by weariness to their plight with outstretched hands reach for His mercy. He is just in all that He waits for not wanting adoration by coercion but by a vindicated love.

We are baptized by the Spirit but also by His fire of purification. For He knows the value laid beneath the self-imposed impurities of this world and is Faithful to make us His Righteousness just as any prospector seeking pure gold. He does not seek those who have taken the polish of this world, being smooth and suave but the uncut, jagged and splintered nuggets. For by this, is His Glory revealed in imperfection. For He truly is just to make us the gleam and treasure of His heart. 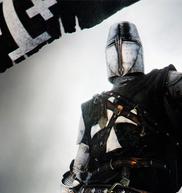 The just one awaits! Awaits for His enemies to be put under His stool. In Him, lies our Victory and Glory. For is He not the Blessed Assurance; the hope of Glory that we all with closed mouths have an expectation for? Then, we who have been sacrificed for His Glory can only wait in trust for His just hand to be displayed in our very sight. For He promised to reveal His justice in an unjust world!