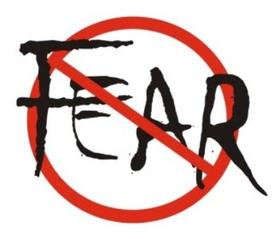 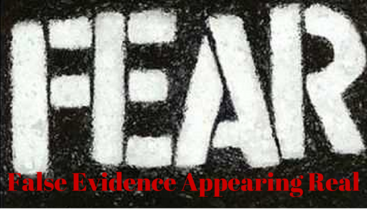 This is why God had to pull Abraham away from his people and commanded that His chosen people do not intermingle with those cultures that were opposite to what God wanted. The choice of fear is conditional to life or death; abiding or separating from God. Throughout the Bible, the phrase "fear not" is used constantly and the word fear is recorded more than the word love, depending on the version. Some even claim that this phrase, "fear not" appears 365 times as in for every day of the year. Of course, this does not matter and these types of things must be closely scrutinized for they can lead to superstition, even though it seems legitimate. Consider this; these types of claims are usually based on mainly the English translations, especially the Kings James Version; but in reality, we must base such things from the original bible which is a mix of Hebrew, Aramaic, and Greek languages.  In addition, the original Jewish calendar year does not consist of 365 days.

Of all the four letter words not to be used, this is the most troublesome. Many believe it is only natural that one should have some fear, especially when faced with overwhelming odds that threaten their mortality. There is only one type of fear that one needs and that is the "fear of God". The word fear means to be afraid or to reverent the source of fear; as in to bow to it or surrender to it. This is why as Christians we must take responsibility whenever it comes to fearing someone or something. We must only fear God, in demonstrating reverence to His Power and Glory. That with the Godly type of fear, we recognize His sovereignty over us and submit to Him and His will. Why? Because the alternative is to be separated from Him and cast away into the darkness. There are the two forces at work; light is life and darkness is death. With fear of God, it is a spiritual condition, whereas with fear of darkness, it is a carnal condition.

Too often, many have allowed fear in the carnal mind to guide them into things that mostly in the long term cause more distress, disease and even disabilities leading eventually to death. Now, fear is not to be confused with caution, perception or prevention. These acts are based on having an instinct or intuition of something that may or not happen. If anything, for Christians it would be more the counsel of the Holy Spirit and Heavens Angels seeking to protect God's saints and anointed. The action of fear is caused by a dark source for "we wrestle against spiritual wickedness"; and is a command of God, "not to fear". God commands us not to fear, in the sense that we allow our senses and spirit to become entangled, as in unable to function, leading to confusion, mental blocks, and blindness. When this happens, we have essentially open ourselves to satan's works, who is the "father of confusion" and where this exists, so will "strife and every evil work". We become spiritually blinded from the truth and accept the lies of the issues we are exposed to.

When we accept these kinds of scenarios from a carnal viewpoint; "False Evidence Appear Real" to us and we can't distinguish what to believe and follow. When this happens, we have voluntarily denied God's hand in our lives. It's like when a teenager who wanting to experience life ends up with a "set of shady individuals" who fills them with deceptions, lies, and ulterior motives, so much that they parents who want their child to live without hurt or trouble cannot penetrate the facade that has been pulled over them. There comes a struggle of life or death for that teenager.

What is fear - false evidence appearing real. We must not acknowledge these types of trivia, but with discernment put them and keep them in the rightful place they deserve. The Bible is filled with numerology, where the amount or sequence of numbers, quantities have a spiritual meaning and significance. But none of this on the surface should have any influence on our actions of fearing; unless we order our lives according to them. This is where out of fear, we put our faith in things other than God and satan has utilized these fears; connecting our "dark" faith with manifestations of the spiritual "magic" seen and exposed by his agents in the practice of sorcery, magic and even clairvoyants; otherwise called fortune tellers, soothsayers or mediums. At face value, all these seem entertaining, but with more and more exposure, we become subject to what "we see" as opposed to what "we hear" and therefore the kind of Faith we ought to have becomes dim and irrelevant and more credit is given to the man rather than to God. When Moses struck the rock for water, he unknowing gave himself more credit than God, causing those around, to fear him more than God, by not "keeping Me Holy (reverence) to the sons of Israel". He allowed his own fear of not trusting in God's direction to "speak to the rock" by taking matters into his own hands and by brute force hit the rock for water.

Whenever we choose the fear of earthly and ungodly things, we insult God, in that we place these things above Him and not reinforce our Faith and trust in Him, that He is superior to all; whether in Heaven or on the Earth. We must be consistent in standing up to fear, because when we do that, there can only come Godly benefits. Many of the prophets did this and by standing up to fear, experienced God's hand move, not only for the nation of Israel but even personally. For the absence of fear, brings us closer to God who is love, especially when we place our very welfare into His hands. God's thoughts for those who seek Him is "for peace and prosperity". Peace comes before prosperity, which from a carnal mind; one would think it should be prosperity before peace. One cannot have true prosperity without first having a peaceful spirit. mind and body. God, want's us to vacate, abandon anything that would cause us to depend on more, other than His Word. When Elisha's servant saw the enemy's armies surrounding them; Elisha asked God to open his eyes to see the Angelic armies that would defeat Israel's enemies. Notice; Elisha already knew and spiritually saw God's armies; only because he did not fear what man could do, but out of fear, reverence, and trust believed only in God and His Word for peace which includes protection and leads to prosperity, from the spoils of defeating the enemy. When Elijah prayed for "no rain" for three years, because God needed to make a point. He was provided and guided for those three years, because he did not allow fear of man or of no water, being in the drought himself, to order his steps. God not only provided for him but used the opportunity to enforce Elijah as a prophet of God. From trusting God and not fearing, we are raised up to those around us.

Fear is never the option for Christians and knowing that in this world, will face trials and tribulations, must cling to God and His Word to be overcomers and triumph over these things. For only by this stand and taking the appropriate actions as the Word dictates to meditate, pray and call things as if they were by Faith, will we see God's Glory not only manifest in our lives as a testimony to Him but also for our Victory to be an edification to our belief in a God who's very thought towards us is for peace.