Faith is a substance! An element if you will of an unknown composition that interacts with the “invisible”, an alternate dimension we commonly call the Spirit world. Yet, this world is as real as the one we call, Earth. Faith bridges between both worlds in an exchange of words spoken; acted upon and believed for with the required elements that manifest and bring into our reality needs and wants. The Bible is clear that God supplies our needs which is akin to the parable of the birds requiring no need to toil for basic necessities. God also promises to give us our desires and wants which are different from basic needs; many times exceeding our desires. Both require the same Faith and must be in line with God's will for us, which is “peace and prosperity”. Faith has foundational Truths that cannot be trivialized because of immaturity towards the Christian walk. This immaturity is not about age but more about the attitude we treat Faith with. A child has more Faith not because they are better enactors of it, but more because they do not complicate it.

Faith has no respect for social norms, classes, cultures, traditions or your bank account. It only relies on one's capacity for belief and inner conviction. Faith is limited by the carnal mind but is limitless with the body's spirit. It will ultimately deliver to you the treasures of your heart. This can be materialistic or Spiritual resulting in either loneliness or fulfillment respectively. Faith is a slave for selfish or unselfish things and has no compassion regardless of how these things shape our life. It is still Faith no matter how you work it. It will produce after its kind. So if we have Faith for a "boastful" car as opposed to a car of our "merit"; the results will be after its kind. The "boastful" car will produce envy because that was the intent of the heart and the “merit’ car will produce wisdom. This is why God sees the heart and judges us. Faith is a force that cannot be avoided as it is interwoven into our very existence and should never be taken for granted.

The two main factors in operating and using Faith has nothing to do directly with God but mainly by our own perspective on the unseen and belief. If we don’t acknowledge the unseen just as much as the seen, and if we are not consistent in belief; then our Faith is retarded and acts more like a roller coaster with ups, downs, and inconsistencies. Christians do not have a claim on Faith!  For it is not prejudicial and is justified whenever it works. This is why although many Christians frown on it, saying it is secular in nature and should not be associated with the body miss the Truth of a Positive Mental Attitude and Self Talk. Just because it is not directly quoted from the Bible does not mean it is not Spiritual. How does Faith work, but by hearing and believing in God to perform His promises. This is why Paul talks about renewed thinking and Jesus saying, "Faith is like a minute mustard seed”. For Faith to be effective; the mind and spirit have to be in the right frame to enable Faith to start working. In many cases, secular persons have more Faith than Christians. This is because, they know what, why and when they want something. They depend on themselves just as Christians ought to do for Faith to work. God established and Jesus showed by authority how Faith works. Man’s responsibility is to work God’s Faith. The Christian Faith is not just about Bible verse quoting, amens and pontifications; but is a living, breathing, intelligent, holistic movement of the body, mind and spirit.

Now; Faith is! This is the same as saying; “air is”! We rarely use our five senses to recognize air and that’s what the ultimate measure of Faith is for all mankind. And although the Christian acknowledges it, does'nt mean it is operating as it should. This is because the world has programmed a carnal perspective of caution, doubt and skepticism with most things as we grow up from childhood. Faith does not recognize the difference between something good, bad or for that matter as humorous. Faith will act on it! Faith comes and works by hearing and has a direct link to the words used, which is aided by our inflections of these words. Someone saying, “it’s such a bad car” using a negative adjective to describe “amazement”; still results in the car “becoming” bad and breaking down. This is because Faith operates by word definitions as pictured in the mind. In addition, by using words in both a negative and positive context only makes Faith inoperable with little or no effect. Faith may be said, to be confused. Some may consider this a natural progression of language but in reality this is part of what the Bible refers to as “evil becomes good and good becomes evil”. Faith is meant to be used for not only good but the Righteous things of life. It also goes hand in hand with prayer. 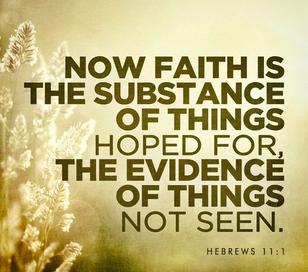 Faith is best when it is specific. The specifics only being what God has willed, decreed and ordained. Our God has a Kingdom and a Universe, not a village, township or a district. Therefore our Faith should be measured in His domain terms and not our own. God has not placed any limits on what our Faith can believe in and expect for as heirs to not only His Kingdom but also His Universe. In fact, it is better to believe for things far beyond one’s immediate reach than just settle for things within one’s reach. David clearly gives this example as a shepherd boy of no distinction, boldly asking what will be his reward for slaying Goliath. His life was the first rags to riches story before it became a norm in Hollywood. In addition, the more detailed we are about what we are standing in Faith for is the more surprising the manifestation will be. We should never try to figure out how the manifestation of our Faith will come about, as this limits Faith’s ability to utilize all that is available for the manifestation. We are the initiators of Faith and not the planners or procurement of it. True or best Faith is when we are least involved and where we “set it and forget about it”.  Thereby fullfilling not to become anxious over anything. 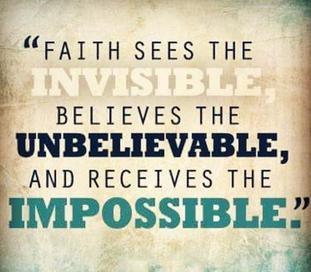 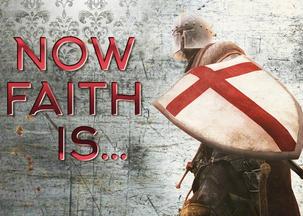 The Bible says; as long as the Earth remains, there will be seed time and harvest time. We are designed to be stewards in every aspect of this world and God’s Kingdom. As with every seed sowed when we pray and ask for something we have to protect it from satan. This includes not only becoming anxious for what we have Faith for and also to maintain Trust, Belief and right standing with God. The opposite to this; and is detrimental to Faith is fear, doubt, and grumbling which in essence is sin against God. God knows our concerns; what we will be standing in Faith for; long before we even start the Faith journey.

​Faith has no timing except the one we place on it. We can expect Faith to manifest at any time by declaring it. This is more acute based on our Christian walk. And may seem to contradict Daniel's prayer being delayed for 21 days by the enemy, but it was more because Daniel's Faith was not operating completely and purely as Jesus'. In this story, we see that Daniel is weakened and fearful by the vision and is why the Angel was delayed until Michael, the Arch. Angel comes to help to defeat the prince (fallen angel, spirit) of Persia's kingdom. After appearing the Angel encourages Daniel to have fortitude by “standing upright”. When we stand in Faith for something, we control the time it appears by our body, mind and spiritual health and disposition. In the early days of Faith, God on many occasions used a prop to help His people have Faith, especially with Moses who stated, “I am not eloquent” casting doubt on his Godly role, abilities and retarding his Faith. Later on, Elijah demonstrates he is a “giant of Faith” when faced with Israel’s enemies and manifesting three years of drought on the land. With Faith, anything is possible and is the overcoming force regardless of any man-made hindrances. We can aid Faith by using the five senses so that our focus does not become distracted and fuels our expectations of the things we are believing for. We do this by seeing, hearing, touching even tasting and smelling our expectation.  In other words, by the imagination, we help our Faith to be sustained and can; and should include confessing our expectations. What is Faith, but the "evidence of things not seen". Faith is used by declaring our wanted expectations. And just as fatal; the senses can kill our Faith and our person. 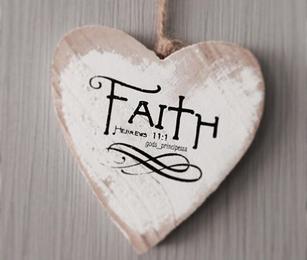 Use it or lose it! Faith in simple terms is a muscle and requires constant exercise for it to be effective in carrying and delivering heavier loads of manifestations. As an example, it is easy enough to believe to receive five dollars but this belief increasingly becomes a challenge when believing for amounts beyond a practical reach such as five million dollars. There is no short cut to applying one’s Faith and it is a requirement to please God. ​With Faith; all the promises, relationship and conditions for our Salvation and Covenant is fulfilled. It is the currency of Heaven and will eventually be for the Earth. Everything a Christian is required to obey and do is supported by Faith in God; and mainly as an unseen force that reveals His presence. Faith existed from the garden and without it, nothing else matters to build our belief for the Kingdom, where the use of Faith is as common as we use our physical senses in this world. In Heaven, we will not be conscious of applying Faith for it will be second nature and will be as the others aspects of our Salvation.