​There is nothing in this world that does not need some form of power and a formula to achieve it. In the late 80's, early 90's; "The Power song was produced with the catchy phrase - “I have got the power”. A high beat song where many saw has having the power to control and dominate their surroundings and even friends. It even makes reference to the devil and heaven. There is truth to this when we frame it with the proper attributes. How we see in our minds eye gives us the power over the good and bad in our lives. This power can be used by anyone for good or evil. It is when we are confused or unsure as to the direction of our lives and what statement we want to leave behind as a legacy that we are unsure and unable to accept the power available to us. The life of Job is a good example of what happens when we lose the clarity of our mind and subject ourselves to other powers - Job 3:25, "what I fear have come upon me". In the Spirit, there are "powers", an angel class; subjected to God and satan (his fallen angels) alike to do tasks that influence our decisions. When we allow these influences to direct our decisions, we essentially become the slave rather than the master of such spirits. Yes, the good angels are there for us  and are ready to be commanded by the power that lives in us. Everything on earth and in the heavens are subjected to the power we have been given.

Having or being around power brings confidence and in some cases an euphoria, giving a false sense of peace and fulfillment. The challenge is many do not first accept this, secondly don't take it and lastly don't apply it. It has no preference or partiality. Some may refer to it as faith but whereas this is about expectation and knowledge; power is about application. This is reflected in power formulas, but the simplest form is that of “power = energy / time". Where power is the result, energy our efforts and time the period we apply. Success is based on the proper energy and the consistent time we apply.

​God is long term, we need to understand that, as we are being developed for His purposes and our benefits. Our power and God’s use of us is connected to the energy (not the quantity) and time we utilize in Kingdom business. This is no different when as a worker, we do a 8 hour work day. One worker gives the expected effort, another gives a higher quality of effort. Who do you think will get noticed by the overseer. The better worker gives from the heart rather than lip service. Ultimately, God rewards based on our heart, not our sweat. God will raise those who are humble in attitude, meaning not boastful or egocentric because of the knowledge, abilities or qualities they process. He raises you up when our heart matches our power - Ps. 147:6.

I have the power when the application of the formula is done with the right attitude and actions. This leads to righteous Faith. The power we achieve is limited by our own faith in it. This is why, Jesus talks about having a child like attitude - Matt. 18:3. Not to be childish in our thinking, but to be unhindered by outside influences and accept wholeheartedly the Word we hear. For most people, we willing accept negative words readily than positive words. This is because from birth others around us have also been influenced by fear, worry and anxiety. This cycle of the curse is perpetuated unknowingly by many. When we cry out from our heart unto God, He is Faithful to give us the power to win. God first action is always to separate us onto Himself, not because for selfish reasons, but so He can begin the process of empowerment. This we see with iconic men through the bible starting with Abram - Gen. 12:1, "go out from your country, and I will make you a great nation"; Joshua - Jos. 1:8, "meditate the Word"; and Jesus - Jn. 15:4, "abide in me and I in you". These men were doers not only thinkers. The result of having Godly power is visionary accomplishments. Abraham started a new nation, Joshua took the promise land and Jesus started Christianity. All operated with power.

Some have said they are satisfied and it's their role in their local church, even if it's an usher or cleaning of the church. Where is that scriptural, and why would God and Jesus both indicate we are to do great things. God told Adam to have dominion - Gen. 1:26, and Jesus told His followers they will do greater things - Jn. 14:12. You don’t move from milk to meat just to be subservient to anothers man desires. Now to be clear, I am not advocating we all go demanding a better role in our church or community. That would be unrighteousness. We are all one body working together in harmony. Our role for God is directly linked to our attitudes and actions as well as our attributes. Jesus was not only the Son of God, leader of men (by His actions and words) but many times got His hands dirty as a servant to others. John. 2:1-11, tells us Jesus availed Himself to other needs and John. 13:4-5, shows us despite being God's royal Son; Jesus washed the dirty feet of His apostles. What is being demonstrated is we are not limited in our role, but we limit ourselves with faulty thinking, false humility and other opinions of ourselves. A person can work as a janitor for minimum wage during the week and still fly a jet, because God made him wealthy to preach or minister on the week-end in far off places. We are put in places to express God's will, and not for our ego or status.  Our power of image is not determined by others impression about us, only by what we display and what comes from our attitudes and actions.

Effective power is what we ought to be after to achieve. The Word talks about four powers required to place ourselves in a righteous position to succeed.

These form the foundation to walk, talk and act in this world as the righteousness of God taking dominion and crushing satan below our feet as Jesus showed us and did. All other powers, such as healing result from taking these four wholeheartedly and applying them in all our relationships. Four from biblical numerology is indicated as completion. This is seen from Genesis with creation having four seasons to Revelations, where four creatures worship God day and night. So our part with the Trinity; God, Jesus, Holy Spirit is the completion of His "A-Team"; the fourth component being a man. This has been His plan before the foundations of the earth.

We are spiritual beings with physical work requiring Godly power. As God is vast and uncontainable by His power, so are we to expand our horizons by our power through our energies and time invested for Godly visions. God gave Adam this vision, to take dominion (control) and Jesus reiterated it by saying, "I give you power over the enemy" - Lk. 10:19. We have come full circle as to why our creation. The first place to use our energy (efforts) is to “seek first the Kingdom of God”. - Matt. 6:33. The amount of time in doing this determines our power effectiveness. This leads us to apply the power formula over and over again until we achieve power in our mind, body and spirit. We fill up to share (empty) only to be filled up again and continue the cycle.

God gave His power and by His power is the body of Christ. By this will all darkness of shame, timidity and fear be eradicated and all will be as Jesus is, where we have been given a standing invitation to sit in Heavenly places with God to be bold, righteous and “go about doing good” - Acts 10:38 as Jesus did.

Flush it out ! - There is no power until you squeeze the trigger.

​Power has been ordained by God not only for Himself but for us as well. We must get to the point in our attitudes and actions that we are His righteousness to be expressed on earth and that happens when we have His (the) power - Ex. 9:16, "to show in you, Godly Power". The historical matter is that Adam was given the power, lost it and then Jesus ransomed it back for us. So we can't hide the fact it is available to us. It's like a workman who has all the tools at his disposable but unwilling to do the work, not because he can't pick up the tool but more so he is unskilled in using the tool. It's in our hands as to how effective we will be in applying power. Power to overcome our circumstances, power to defeat the enemy (satan), power to build and even the power to destroy. Yes, destroy. Jesus demonstrated his power over the fig tree as well as that of satan and his evil spirits - Matt. 21:19, "the fig withered away"; Matt. 8:16, "Jesus cast out the spirits". We have this same power, only by recognizing it and applying it with correct attributes will we have the same results, just like the disciple, Paul - Acts 16:18, "to the spirit, I command you leave her, and the spirit left her the same hour".

There is physical power as well as spiritual power. Both are required. But wait, how can a “so-called weakling” have physical power? All power emanates from our thinking, so the strong, weak, young, old, and an average person all have the same magnitude of generating both kinds of power. This is referred to as leveraging. We see this in mechanical equipment where loads are lifted or moved with hydraulic pistons which are relatively small compared to the mass they are engaged with. God often use the weak, humble or the minimum to accomplish His goal to show Himself strong but also to teach size, quantity and strength are not prerequisites to applying Godly power and to win. 2 Kings 6:17 shows us with applied power, we need not be overcome by overwhelming circumstances. It is the David and Goliath example.

David was not only skilled in slinging a stone, but also, God developed him with a winning attitude and most importantly built his faith and confidence in a God he never saw but knew intimately. As a shepherd boy, his charge was to protect the sheep from predators. This can't be done without knowledge, wisdom and understanding of your task and by taking the time and efforts to learn and apply your trade in power. In addition, David spent days alone where his predestined image was developed by his work, his efforts and his meditations. This is part of what defines us more than a molecule which is subjected to outside forces. The power David demonstrated through his shepherd life was to prepare him for his role as king, as he traded sheep for people. This is the power of vision.​ 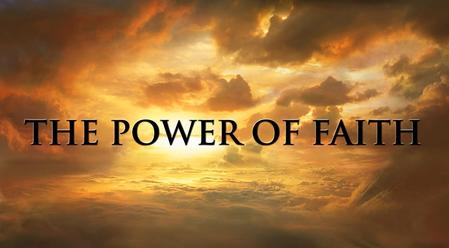