The cry has been given. Prepare for the battle! Jesus clearly said, “Do not think I have come for peace, but with a sword!” As we face the challenge of our days we must not be naive to think that the enemy is not on the move to destroy all that Jesus won for us. The world is moving fast into self-destruction, calling good, evil and evil, good. If you have vision especially that of the old prophets then you can see the dust storms approaching across the horizon, bring with it sounds of trampling in its paths. We must prepare for battle!

Don’t be found asleep as the bridesmaids were, when all of sudden they being unprepared were left in the darkness pleading and crying as the door shut on them. The enemy will come through and from the shadows, waiting to upstage any facade given to keep your gaze. Then as a flash flood, with horrifying threats; many will be washed away unable to hold ground, grasping at anything to stay afloat to no effect. Be prepared and watch for the battle.

All whose sign is the cross knows of this but many yet still hold to the traditions of their forefathers and resist the new garment given so freely in blood. Have we not yet come to realize, there will be life or death because of foresight and not knowing one cannot overcome if not on guard and ready for a battle. When do invaders come, but in the unaware times especially as sleep overtakes the victims. For asleep, comes only reactions and not proactions to not only defend but defeat any onslaught of the enemy. Did not Jesus tell those closer than a brother to stay awake and spend one hour in prayer? Yet, with lips they gave Him only assurance of their love; who would sacrifice blood for their weaknesses. They slept and without warning the accusers came upon them and having been surprised could not stand their ground. Because they neither prepared nor watched to see for the enemies movements. Watch for the signs of battle!

For light will shine from your presence. The light that is inherent in your armor, from head to toe. And with the sturdiness of the shield and the menacing edge of the sword, let the fear of God be shown confidently knowing that no earthly or heavenly thing can stand against the armor of God and its blood washed sentinel, guardian of Truth and Faith, Vicker of all that is Holy. Prepare, for the Battle!

The helmet of Salvation has been given, and now with the breastplate of Righteousness do we know our enemy. Secure with the Truth and take the shield of Faith, never forgetting who is for us and with the Gospel stand firm in its unmovable foundation. But most of all, take and use the sword of the Spirit, not for parading but to defeat the enemy’s accusations, advances, and covert deceptions. Be not only prepared but by actions subdue all unrighteousness. Stand and face the enemy for once he sees you are of the cross, has no other choice but to flee into the night from whence he came. 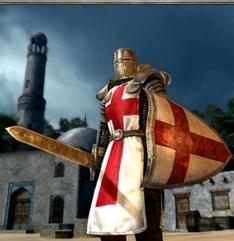 Previous
IS
"Lead from the Front"