This is intelligence as ordained by God and not by the intellect of man. We all have been endowed with certain key traits which are not the characteristics of stature, ability or biases. These key traits are the core of a Godly image and cannot be alienated due to our surroundings and influences. It is like immigrants living in another country. Their indigenousness will always be a part of them regardless where they live. When Adam and Eve left the garden, their core traits were still intact; they just forgot them because they focused on the physical needs and environment. This caused them to toil, fear and have anxieties; all the while trying to figure out things on the own. They more used their intellect rather than the intelligence that existed in them.

Intellect is the applied knowledge from a rational (logical) view while intelligence is the ability to manipulate knowledge. Some define intelligence as the basic eternal quality of a divine mind. Another way to say this is intellect is by man’s power and intelligence is by God’s power. Everything that we come into contact with, we have already been given the Godly intelligence to understand and apply it. How can this be said when for the last thousand years and more, we all have had to learn and be taught by others through an education system. Some say, “We are not Einsteins”. On the contrary, it is this very education system that has retarded most into accepting and believing they can’t do or think beyond what’s in a book. As Christian, we believe all knowledge comes from God and those who seek Him will be able to do all things through Christ - Phil. 4:13. All knowledge is given by inspiration of God from concept to design to manufacturing. The early Jews were given skills to make things by God - Ex. 35:35. In some cases when we review the bibliology of these creative men and women, we find that they sought inspiration and knowledge from God. - Prob. 8:12, "find out knowledge of witty inventions. 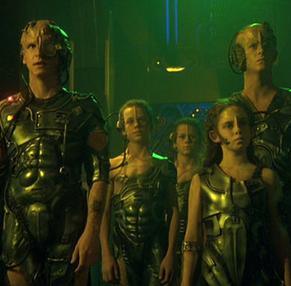 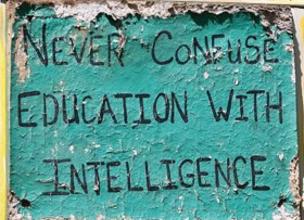 Every knowledge, process and idea have its conception from God’s Spirit. Just like money, these things are neither good nor bad and are manipulated by man either by his intellect or his intelligence. When we venue outside the pattern of God’s ways and begin to color Him in a way that puts things under our power we are applying intellect rather than intelligence. Intelligence (or common sense) tells you if water is boiling due to heat then the water is in a different state and will still burn you if your hand is in it. The intellect looks to determine at what temperature water starts to boil and how long the hand can remain in the water before being scalded. In the same way men main their intelligence by accepting the Word as is while the intellect sees no validity for it. The intellect is not satisfied by the natural, spiritual and physical laws. For the intellect, they constantly look for another hidden proponent resulting in "going in circles" and most times not coming to any real understanding. The intellect many times is more interested in exercising their brains, theories, and thesis for that very sake. Christian’s must lean towards the naturally endowed intelligence (intuition) that God has placed in them. By doing this, we put our minds and Spirits in line with God’s ways and are not as concerned with every aspect of things. We operate more on knowing God has framed everything, created everything and have ordained everything. We focus on the application of knowledge rather than this mechanics of it.

God made the spirit, physical and natural world whereby all three co-exist and work together for man’s welfare and God’s pleasure. Intelligence tells us that nothing occurs without a divine purpose and reason and there is no waste as long as all the three worlds are operating in harmony. If it is working, no need to fix it. The intellect seeks to break down this harmony because of wanting to control and have power over these things for their own self and ego. The intellect ultimate goal is to be as a god. Consider these areas the intellect has pushed to control. 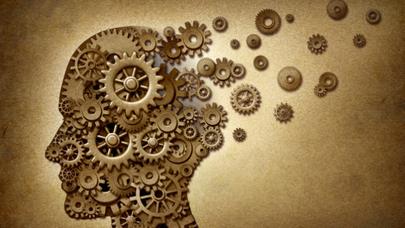 ​As a father, we all want our children to have a safe, healthy, productive and prosperous life. Our goal is to make their life better than ours. We tend to believe that our life is not good enough for them and that they are to exceed all we have learned, done and accomplish. This mindset makes us push them and we micro-manage a lot of their daily routine. This is more evident in Asian families. We fill their heads with tirades, guilt and promises to motivate them into doing and going more than the other average person instilling competition and suspicious attitudes. Most often than not, we are basically grooming them into someone we feel we ourselves have come short of the mark. Many times as fathers and mothers we fail to see the natural inclinations of a child and instead steer them in a direction that promises security, money and status. We make their life, ours. God has the same intention but by a different approach. He has put into us His view and ways of things; we just need to tap into it. 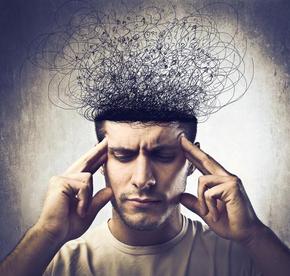 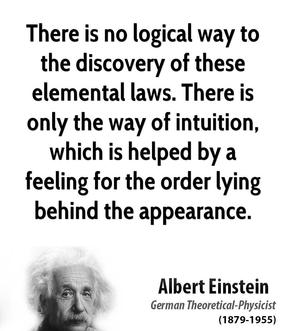 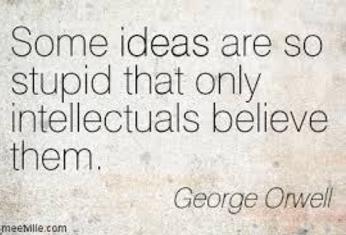 1) Creation is paramount for both the intellect and intelligent person. The intellect forms their own version by stating all forms of organic life must have evolved from a lower but similar organism. Yet, the very law of evolution has to have started with an organism to the finite that had to be created. The big bang is also self-defeating as matter has to exist before the planets. Matter must be created before it can evolve much less randomly collide and form order. Intelligence tells us that these questions are answered by Faith in believing that some form of higher power has orchestrated these things and we benefit from it. The intelligence given to us by God assure us despite our lack of understanding and knowledge of these things, there is no concern because the universe and man have their precise place and work in harmony. Yet, for all the intellect's thesis they are unable to determine and control the unlimitedness of the universe and despite common elements of different planets only earth has life, even though other heavenly bodies are older.

2) The environment of land, sea and air is another area the intellect seeks to control by manipulating them with man-made products and devices. He does this by not working with the natural order of things and using technology to manipulate it resulting in unusual weather patterns, destabilization of land and sea masses, and other forms of life having a higher mortality rate than expected. The intellect tends to drain rather than manage or care for focusing on short-term goals. It does not take much intelligence to know that nature herself has cycles that if not adhered and respected will result in a dysfunctional system and that in the end affect us and our future generations. In some cases, the intellect looks to natural causes as the possible reason why biblical events such as the parting of the Red Sea or the plagues of Egypt happened. Intelligence only sees that these events occurred just at the right moment for it to be called a miracle or the Hand of God. The Intellect cannot grasp the "on time" ability of God and Faith indicating a constant surveyor over man.

3) The intellect also focuses on human manipulation with the intent of removing all that makes us human. The justification is to make a better human that is more productive, smarter and stronger. This in itself doesn’t sound threatening but what are we to really gain other that another manipulation of the natural order where the complexities that defines us as humans; body, mind, and spirit is to be all reduced to the cohesiveness of a bee hive. Just like the Borg in the Star Trek series. Intelligence tells us that for such a complex being, there have to be creative considerations that enable each and every human to be unique in some way and that we are not defined by the physical or mental attributes but by the Spiritual ones. Regardless of any physiological or mental constructs developed by the intellect; man cannot be contained by one, yet intelligence tells us that we have barely scratched the surface of man’s capabilities especially when the mind, body, and spirit work together as one.

There other areas that the intellect applies too much thinking rather than Faith, even when it concerns the Word. The Word is absolute for the Christian because we should not place ourselves as definers and authors of it but only discoverers and practitioners of its Truth and infallibilities. To do otherwise would place God and His very character under scrutiny thus leading to doubt and exercising the intellect over Him. Intelligence tell us if God is the author and we are His creation, it is more prudent (wise) to adhere to His Word in belief, Faith, and submission and that the creator has paved the way for us in all aspects of life. Just like a natural parent, God wants to be our over watch to keep us safe, secure and provided for.

Flush it Out! - Intelligence is a sign of Faith but intellect a revealing of doubt.