God is not lazy despite some painting Him like a clock maker, having set the time and watching as it winds down into predictability by the numbers. God is a creative being at His core of cognitively. His creativity is evolution by design and not by a sequential set of random events. He is in control of His creations by the employment of holistic design criteria.

God has created hundreds of magnificent things which although seem random often have some form of connection to each other. From our perspective of linearity, we fail to see these connections and miss the opportunity for a Revelation of just how creative God really is. To put some perspective on this, consider water, whether Heavenly, underground or on the surface. As a fluid substance, it sustains life the same as space sustains other forms of life. Now, before some say life can’t be sustained in the vacuum of space this is only because of the linear and limited thinking most people have. Life cannot be defined by the human condition but by God’s creativity. We breathe air but do Angels? The Bible indicates they also eat and are able to transform from a Spiritual to a physical being. God's creativity seems to have set condition but is fluid and alive.

God’s creativity can never be denied even from those who don’t believe He is because they eventually come face to face with the futility of their own creation. Whether the tradition secular ideology of evolution or the big band theory; both require a genesis of a creative force. No matter how much any secular theory pads itself with suppositions it always requires a diminishing devolution to a starting point that begs the question; “Who created it”? God is the ultimate starting point of any life and only by His creativity do we experience the wonders and marvels of His mind.

God’s creativity is about His vision and the good book not only demonstrates His fingerprints but is in itself the revealing of His imagination. Genesis speaks directly to creation and Revelation makes the promise of things to be revealed which is nothing short of a process, perpetuation, and longevity of the creative mind of our God or we can infer the continuation of Genesis. God has at His disposal the past, present, and future because time is not chronological in His Kingdom but all are seasons that connect to each other over man’s timeline. We see God’s creative mind through the many metaphors of His Word. When Moses took the people through the Red Sea it is noted they walked on dry ground just as when Joshua and the people crossed the Jordan on dry ground. In both cases, they passed through the “waters” just as Jesus did when He was baptized and then immediately went into the wilderness (dry land or ground). These are a reflection of the first baptism with Noah having to pass through the flood waters and placed on dry land. God’s creativity is Revelation of His work that is to take the fallen man from darkness, turmoil or stress through the purification and symbolism of water’s promise of life on to a solid footing of dry land by His Word.

We can see this even with the birth of an infant that has life in the womb surrounded by water (Amniotic fluid) that passes through to “dry land” and is now sustained by the world of words around it. In each of the story with Noah, Moses, and Joshua once the man has reached the dry land he builds an altar to God which is where He comes face to face with the God who created him. Jesus is God’s creative Power manifested. In Jesus’ example, there is no longer a physically built tabernacle except for the Anointed man Jesus. Jesus is the tabernacle and this renews the promise of Genesis where all who pass through the water for life is placed on a solid ground with God because they are new individual tabernacles or temples of God. God constantly demonstrates just how boundless and unhindered His hand of creativity is by the love He has for us.

God’s creative force is just that; a force that He wields at His declarations and discretion. By the evolution of design, He uses outward circumstances to shape the inward core of life, revealing the true nature of His creation. Just like a perpetual and constant dripping of water or waves; other elements are molded and shaped into objects of beauty and intrigue. This is what He does to a man to reveal what is truly hidden in the core, heart of man. In the same way, as He uses gentle pressure or force; He does with tremendous power or wrath with a flood or a deluge of water. Often, with dramatic effects revealing how well events come together for His purpose and Glory like great lakes of water carved out by frozen ice. In one instance it is destructive and then it becomes a source of life.. 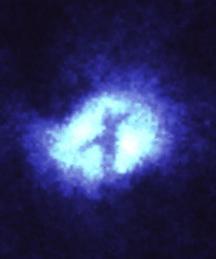 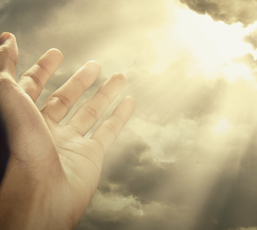 The evolution of design is His purpose orchestrated by vignettes that play out having little or no clue of connectivity. It seems like random designs but with clear cut outcomes. Take a house having several rooms each designed but with a common finish product called a theme and its method is by imagination and aesthetics. Someone having no knowledge of the creative force behind it will see the house and its rooms as a series of experiences aligned together as a complete comprehensive presentation.

God leaves clues of His creativity both internally and externally. These we do not know immediately because we are included in it as it plays out but with hindsight and Revelation, we are amazed at how detailed God is. God cast His impression for man’s restoration on the canvas of the future stating a woman’s seed will come and set the captives free. When this was first said no one understood it not until the clues became a bit clearer with Isaiah and obviously later on when it happened with Mary. That took almost four thousand years of storyboarding until it became a reality.

God’s creativity knows no bounds. Most artists of different disciplines tend to repeat some form of their previous work, but with God, it is infinite just as the universe. God uses the universe for a display of His love for creation and purpose. All major Biblical events are in the stars including Genesis, the flood, Jesus’ birth and the end of this age. Like an artist that hides perspectives and messages in their painting so does God where over time orientation of the stars and planets signify the Earthly time line and events. Not only is God’s handiwork in the vastness of the universe with several constellations and nebulas but what is more intriguing is God’s solution and symbol for the Hope of mankind are captured by man light years away and also imprinted in a man's body. What may seem coincidental could be God’s creativity reflecting many of His other characteristics including humor and foresight; both aspects of creativity. 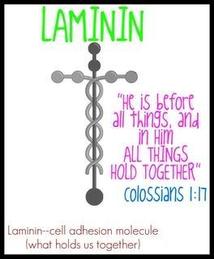 The Cross is recognized worldwide as this symbol. Yet it seems God is not satisfied with the Cross at whatever level man has adored it. God purposely have used this one motif once a symbol of death but now a beacon for life not only on His vast canvas of the universe as with the Cross Nebula but also in His very Earthly representation of a man with the Laminin; a key element, otherwise known as the glue of life. Now, this is God’s creativity from the macro to the micro at its highest ability. 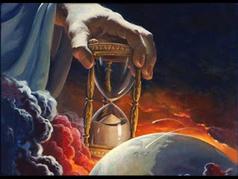